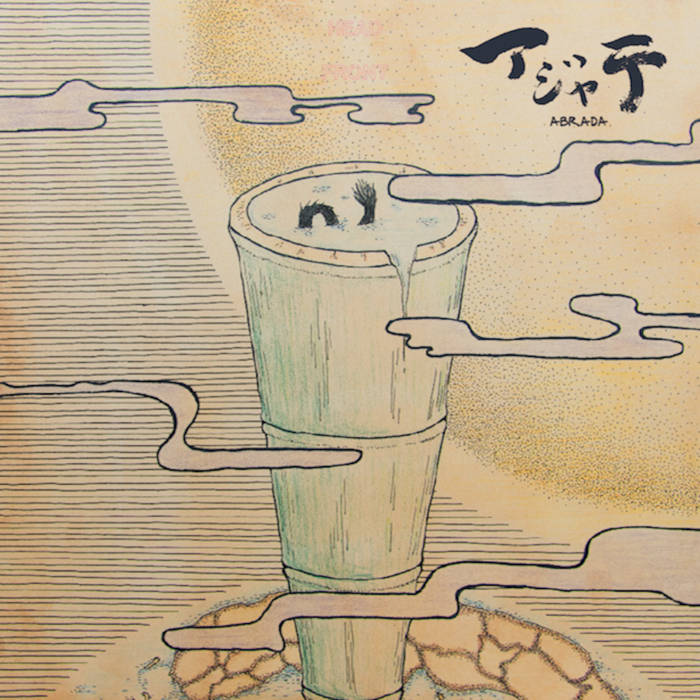 Another unique feature of the band is the use of hand-made bamboo instruments as well as traditional Japanese percussion. The "Jahte" is a bamboo-made xylophone or balafon with a piezo pick-up mic attached to each key, connected to a pre-amplifier to obtain a loud sound and to add some touch of dirty distortion to its warm and natural acoustic sonority. The "Piechiku" is also a bamboo-made string instrument inspired by the west-African "Ngoni" or Moroccan "Guembri" instruments. The Piechiku uses strings of the Japanese traditional "Shamisen". This instrument is also played through a pre-amplifier and John sometimes adds some wah-wah effect to it. All these bamboo instruments are designed, made and named by John Imaeda himself.

Now, add to this unique sound some well-crafted Japanese female and male singing and you get a killer mix of Afro-Funk flavored grooves with traditional Japanese music.

Abrada is the second album from Ajate. Recorded in Tokyo at the end of 2016, this vinyl LP release is the first output of the 180g label. 180g is a Japan specialized label service run by Greg Gouty, who met John Imaeda in Tokyo in April 2017 during an epic Ajate concert at an underground club in the Shibuya district of the Japanese capital. The label aims at releasing highly unique and quality music from Japan, showcasing the vast talent of the Japanese underground scene, never heard outside of the country. Some music you will not be able to hear anywhere else!

Bandcamp Daily  your guide to the world of Bandcamp

Featuring interviews with the mighty Haitus Kaiyote and genre-busting L'Rain.